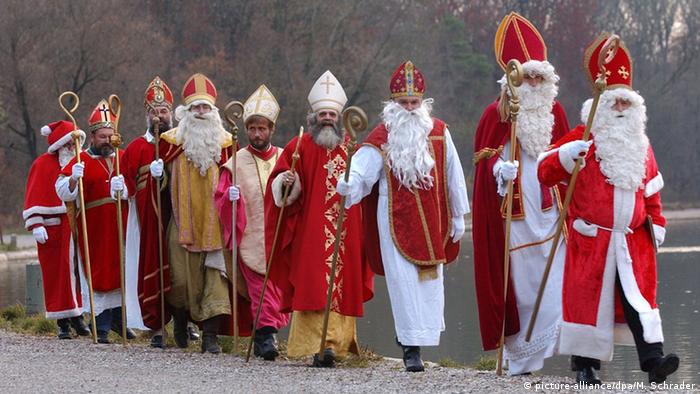 Saint Nicholas and the AI MYTH : About the Creation of Myths.

December 6, Saint Nicholas Day, is the perfect moment to ponder on the essence, the creation and the “sustainability” of myths.

What makes a myth? How is a myth created? What are its main characteristics?

And paradoxically, why demythifying is part of the development of a myth?

On the one hand, we have ancient sacred myths – like the myth of Saint Nicholas.

On the other hand, there are modern techno-myths. The most impactful at the moment: the AI MYTH. And a potentially emerging new augmented myth, the METAVERSE MYTH.

Ever since John McCarthy, Minsky, Shannon and Rochester coined the term “Artificial Intelligence” in their “pitch” for subvention for a Summer Workshop in Dartmouth in 1956, the narrative, rhetorical and semantic universes of  AI have been crafted and defined. (The article “What if in 1956 Minsky, McCarthy, Shannon and Rochester had named it “Machine Intelligence”?” by the House of Ethics deals with this particular aspect.)

What is a myth?

In 1957 the French semiologist Roland Barthes (1915-1980) introduced his groundbreaking book “Mythologies” about the importance of signs and symbols through words and objects leading to ideological and cultural meanings and identities. 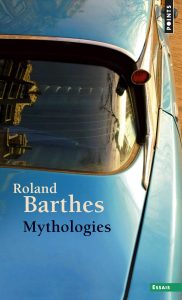 As a side reflection, he evokes the “Myth of Santa Claus”, pointing at strange cognitive process leading us to believe in something even though we know it does not exist.

Notwithstanding facts that deny the existence of a fact, we still can believe in a constructed system with approximate values.

“We believe in Santa Claus even though we know he does not exist.” An oscillation between signs and meanings.

In literature, analyzing the concept of the word myth and the process of creating a myth have a long tradition.

Fundamental questions being “what is a myth” and “how to create a myth”?

Professor Pierre Brunel, professor emeritus in comparative literature at the Sorbonne in Paris, leading specialist of myths, and author of the “Dictionary of literary myths”, whose extraordinary courses I was lucky enough to attend, points at the “terminological vagueness” of the word myth.

The myth is polysemous and therefore multi-conceptual. A myth always conveys meanings. It nevertheless needs interpretation. It talks and explains. It is a narrative.

“A myth is words,” says Roland Barthes. It is a narrative. A special kind of narrative.

According to the Romanian author and philosopher Mircea Eliade (1907-1986), a myth is foremost a Narrative of Creation. It relates the beginning, the genesis of something fabuluous. A phenomenon being narrated. For Eliade, it holds a sacred dimension.

Three rhetorical figures are particularly effective in creating and maintaining a myth.

1) The Hyperbola meaning Exaggeration, with an overuse of superlatives, extraordinary projections and forecasts, and fabulous product descriptions to create a sensational and cutting-edge character. This level of narrative can be found in numerous press releases, mainstream press articles and titles for conferences.

Mostly the impressive future-oriented discourse with exceptional outcome boils down to a deceiving and misleading state of the art.  “AI will be more intelligent than humans, Singularity will outperform the human brain” even though we now know that ML and DL models are super-effective but not super-intelligent.

2) Repetition by redundancy, pleonasms and paraphrasing. To tell the same story over and over again, always differently is an integral part of a myth.  Generating multiple variations/versions with a core message is also the business models of softwares providers.

3) Excessive use of comparisons and illustrations through analogies, allegories and technological metaphors.

The use of metaphors and analogies is an important factor within a mythical narrative.

Analogies, on the other hand are very present in robotics. The creative universe of humanoids like Sophia, Ai-da, Erica and others, only add to their singularity. By creating human features, describing them as “companions”, “mothers”, “citizens”, “artists”, soon “musicians”, “doctors”, “priests”, they paradoxically are set apart in their category. By making them “normal”, “human”, they reversely become “singular”. And not just in an “uncanny valley”- sense.

Leading scientists agree that such uses of metaphors are misleading and contribute to a false narrative, a misguiding perception.

“I think the brain-as-a-computer metaphor has led us astray a little bit,” says Floris de Lange, a cognitive neuroscientist at the Donders Institute in the Netherlands.

And yet contrary, misleading versions are part of the development of a myth. It even strengthens it.

Three Characteristics of a Myth

Most specialists agree that a the concept of  myth is intrinsicly linked to a specific form of narrative.

Beyond their transmissive nature, myths are meaning-laden. They act as open questions, they are both objects to be explained and principles of explanation.

1) The myth falls under the category of discourse, it is a Narrative.

It is in large part thanks to this dynamic of telling a story over and over, in various forms and over a long period of time, that myths are able to survive. It’s their “power of irradiation” according to Pierre Brunel.

2) A myth relies on a collective transmission.

For the anthropologist Lévi-Strauss (1908-2009) each myth is linked to a collective transmission. It has a social, and cultural dimension.

“Because a myth is made up of all of its variations. […] There is no “True” version of which all others would be copies or distorted echoes. All versions belong to the myth ”(Lévi-Strauss 1974)

These characteristics still hold true for the modern techno-myth. Especially the AI Myth and more importantly the emerging Metaverse Myth.

Saint Nicholas and Santa Claus : from a religious myth to a media myth

«Made in the USA»

Saint Nicholas (15 March 270 – 6 December 343) was born into an affluent Greek family in Myra, what is now part of Turkey. He is best known for secretly leaving gifts out for the poor, but also being a devout Christian who became a bishop.

Dutch immigrants helped take the tradition to America, so that by 1822 the poem, “A Visit From St. Nicholas” immortalized him as a jolly sled driver pulled by reindeers, with rosy cheeks and a round belly. But the bishop of Myra and ancestor of Saint Nicolas, will be significantly relifted and pimped. 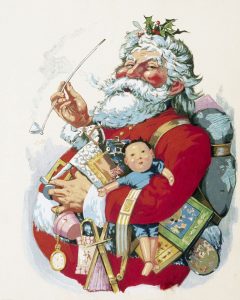 First in 1860, by cartoonist Thomas Nest from the New York’s Harper’s Illustrated Weekly. He chooses the famous red color and dresses the “merry old” Santa Claus with a red gown and white fur, wearing a wide leather belt.

Later it is the artist Haddon Sundblom who stressed his human character by giving him a normal height, a well rounded belly, a sympathetic and jovial face, and drinking Coca Cola. This current image of Santa Claus was created in 1931 for Coca Cola in Atlanta, Giorgia. It was the first time for a product, which is to be consumed ice-cold, to come through the chimney and entering the sacro-saint intimate family space : the living room. 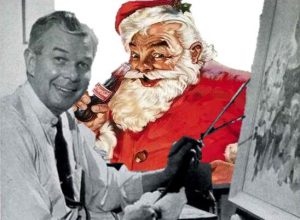 Using the newly created jolly Santa Claus as messenger and salesperson for Coca Cola’s flagship product was a coup de génie that  impacted the entire ad industry, as well as our religious subconscious.

It was a successful business operation of
product mythification and simultanuous religious demythification. The first TV spots in 2002 accelerated this phenomenon.

Thus any myth, be it ancient or techno modern, calls for demythification!

And the myth itself morphs into a vector of feelings and values.

The most powerful feature of the myth for the advertising industry was its capacity to constantly reinvent itself without changing its essence. It has a high power of adherence. Later we even saw a Harley Davidson Santa Claus. 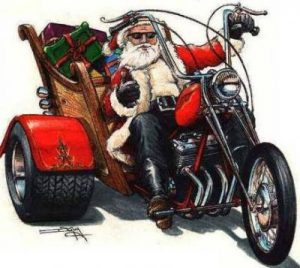 But the real stroke of genius by Coca
Cola was to have been able to capitalize on the values and the meanings attached to the initial image while adding new values. The religious myth had been transformed into a media myth. 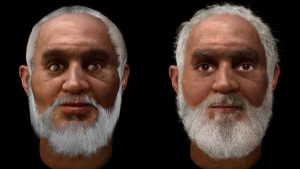 The image of Saint Nicholas on the left was created in 2006 after the Vatican granted scientists access to X-rays and measurements taken from the saint’s actual remains.

Anand Kapoor, the co-founder and director of Image Foundry, the CGI company that produced the photo.

The shock sits deep. According to the findings, Saint Nicholas “was a short swarthy man with dark brown eyes and a broken nose.” Quite a galaxy away from the Coca Cola Santa Claus.

“Nothing is lost, nothing is created: everything is transformed”. Antoine Laurent de Lavoisier (1743-1794).

Besides ancient myths, our modern techno- and data-driven world will create its own new myths.

Having a look at techno-myths such as the AI Myth or the hype Metaverse can be extremely elucidating. Triggering the question: Has the Metaverse the potential to morph into a myth?

The migration of concepts from different contexts, carrying with them their own cultural associations and meanings, are often resulting in misleading cross-domain translations (Ekbia, 2008).

3) The role of controversies

Controversies based on factual grounds are normal in the scientific world. They even are necessary to prove the validity of a theory or a model.

These three identified characterists echo the general myths’ caracteristics without stressing on the social and cultural impact and the collective dissemination emphazised by Lévi-Strauss.

The Creation of a New techo-myth : the Metaverse Myth!

With the emerging Metaverse, we perhaps assist live and collectively, for the very first time, in the creation of a new form of a techno-myth.

Does the Metaverse have the potential to be the next techno-myth?

The Metaverse goes way beyond the AI MYTH whose mythical character is predominently, like all existing myths, attached to verbal narrative and transmission.

With virtual reality, augmented reality, and XR new layers of transmission will be added.

It not only shapes and adds a new form narrative but impacts the very meaning of the concept of myth. It might be transformed, even augmented.

The power of metamorphosis of mythical data

The power of metamorphosis constitutes the richness of the myth and allows a dialogue/multilogue to be woven in between the imaginary, the reality or the possible. The virtual myth transforms into a hybrid and augmented creation.

From Ovid’s Metamorphoses to Kafka’s The Metamorphosis, contradiction and conflict, imaginary and reality, all is needed to fuel the survival of a myth.

Metamorphosis is part of the myth. It nourishes its singularity and sustainability.

Myths are in perpetual gestation or transformation. “The interesting thing, for a literary man, is that this myth of today [the oneof the plane] joins the ancient myth of Icarus […] “(Brunel).

Profoundly modern, contemporary techno-myths draw their substance from archetypes that refer to pre-existing models before morphing into new futuristic forms.

All the ingredients are present for the genesis of a new techno-myth, the Metaverse. The beginning of a new story, the opposing dynamic of imagination and reality, and collective/social participation and dissemination. It probably will be the first real universal myth blurring cultural and historical differences.

Utopia and distopia, apotheosis and apocalypse are substrats of a mythical fundation. Criticism and disbelieve leading to rejection are part of its character and growth.

Can a myth be ethical?

Before closing the article, we need to ask the question : Can a myth be ethical? From our standpoint the answer is no. The question simply does not apply.

Why? Because the levels of abstraction are totally different. Whereas, for example, science deals with “true or false”, ethics concentrates on “right or wrong” whereas a myth can just be “dead or alive” in our belief.

Let’s believe, for a while, even though we know it does not exist.

Happy Saint Nicholas Day for all Children and the Child within Us. 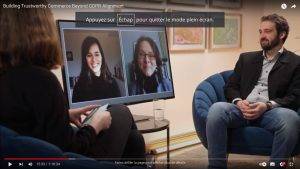